CARRIES, BUT NOT OF SPADES

On sale in a year at the base price of 20 thousand euros, DUU view the last Milan show as a concept (and we have described a preview of number Riders 22) It is one of the few truly original proposals of recent times.
The Milan CR&S that gave birth to it is the same as the very light single-cylinder Vun: Roberto Crepaldi, Giorgio Sarti and John Cabassi, All three riders before entrepreneurs, They have focused on an unexplored niche but interesting. The Duu is a special produced in small series, modular and highly customizable, with exclusive content of American and European style of Confederate Wakan French, but offered at a fraction of the cost. leads, two dialect meneghino, because the cylinders are two and the displacement (1.916 this) It is next to two liters, and why, wanting, the bike PUE be in two places and not as the single-seater Vun. This maxi streetfighter is equipped with the V2 of 56 ° X-Wedge of the American S&S, a strong monster with its 16 kgm torque maximum just three thousand revolutions. The frame is made of polished stainless steel: a big girder which also acts as gasoline container, with aluminum side plates to support the single-sided swingarm (always a large curved steel tube) and the petrol tank which also holds the saddle.
The design is signed by Donato Cannatello, who worked for Aprilia Bimota, which it has positioned unloading under the engine, It hid all the abutments and created an easily editable minimalist line by adding, or removing, a set of accessories (including panniers or a container above the reservoir) functional and aesthetic appendices. The saddle can be in one or two places and there are different solutions for headlights and surface finishes. Despite the big engine, the bike is altogether compact in its kind and weighs as much as a Harley Sportster 883, because DUU is made to be driven not only ostentatious. An ambitious project, not devoid of resistances to be overcome, as its experience and reputation of the CR&S. But it must be said that this reality is organized, small, like a real motorcycle industry. (Maurizio Gissi) 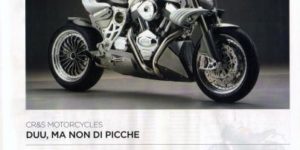