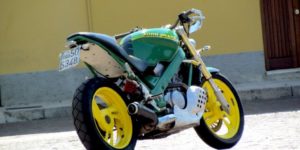 Honda John Deere was born with the precise intent of "to run" the crazy speed 60 km / h on tracks made of endless green fields, rolling hills of sunflowers Fiorentina province, its barge rear wheel tassellata allows to always have the necessary traction on steep slopes and plows fields, the strictly two-seater because otherwise what the hell we going to do in the fields then if I'm alone, the sump guard stole an Africa Twin grateful for the new life that was granted after some "falco" Naples had reduced to little + a pot roast after a few years of chases and shootouts through the narrow streets of Naples "good", the engine has gained a bit of vitality to opening up all the airways because we know that farmers are angry and tend to shoot you if you get caught on their fields with a scooter tessellated.

The John Deere chassis has been completely rebuilt in the back, It works long nights working in the workshop of "maestro" Tony Pizzo Casoria, the saddle is a Monster but was duly remodeled and re-dressed by another skilled craftsman Casoria.
The front fender of unknown origin took into order: stapled sawed and hammered in abundance by myself, shots flex artist Giovanni Scafuro aka Giannigià , other good hammered by a bunch of other people and finally a paint casino good Raffaele Foscarino Mugnano, therefore obvious that at the end of its shape is not of + soft and flowing.

The construction of the motorcycle has cost 4 months , the first two days to dismantle it piece by piece, others 3 months to change, repainting and procure the individual pieces and finally a very hard last month to reassemble everything in the house ! In the true sense of the word because this bike you see that was not born in the workshop, but even in the garage, nor in the cellar, it was born right in my room, next to my couch, my bed and thankfully my stereo, on the first floor of a building in Naples, but no problem kids, even when it came to light it, the building was shaking like when I organize a party so no one paid much attention + from time, the problem has come to the time to take it down the stairs, but it was enough to organize a launch party and behold, the hand of cheap labor is served! The John Deere is finally open road to race!

And in fact he ran.. another for if he ran ... After less than a month after the end of the work was brought to Padova for the then BIKE SHOW, where he earned an excellent third place in his category.
In recent years, John Deere has been subject to continuous evolution aimed above all to make it street legal, then it was equipped with headlights, mirrors, accessories, etc.. all strictly homologated and with typical mounting characteristics of a bike homologated. A challenge in the challenge, make a nice bike, but also functional and in compliance with the laws of the road.
We can say that the challenge has been abundantly won with plenty of mileage and no problems of any kind, but with a lot of taste in driving and pleasure of use. 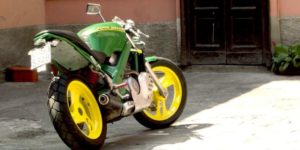 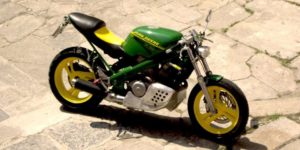 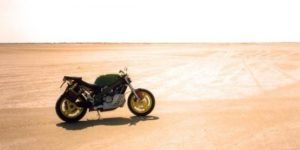 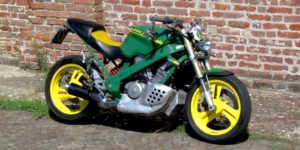 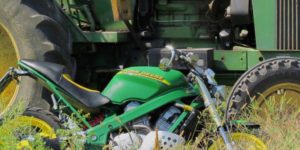 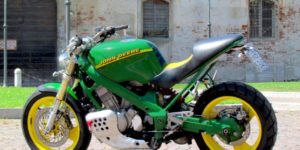 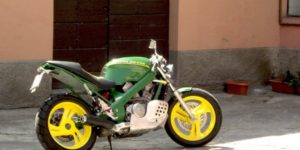 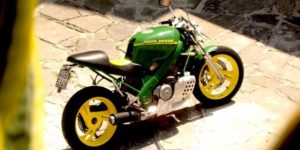 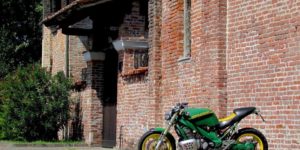 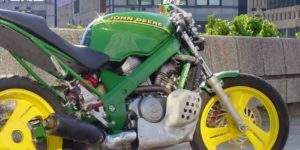 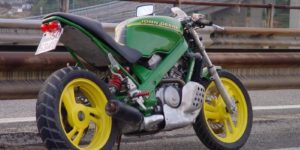 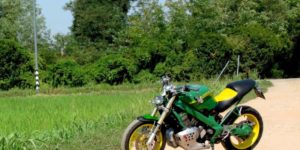